The ancient site of Aphidna is found just east of Kosmothea in north-east Attica, close to the plain of Marathon. A Classical fortification is situated on the Kotroni hill, while the Charadra stream is located just below and to the south-west with a Middle Bronze Age tumulus on the southern side. A second stream, the Varnavas, flows about 1.5 km to the east. In the late 19th century both rivers emptied into Lake Marathon c. 2.5 km away; today, the landscape has been radically changed as a dam has increased the size of the lake almost to the Kotroni hill. 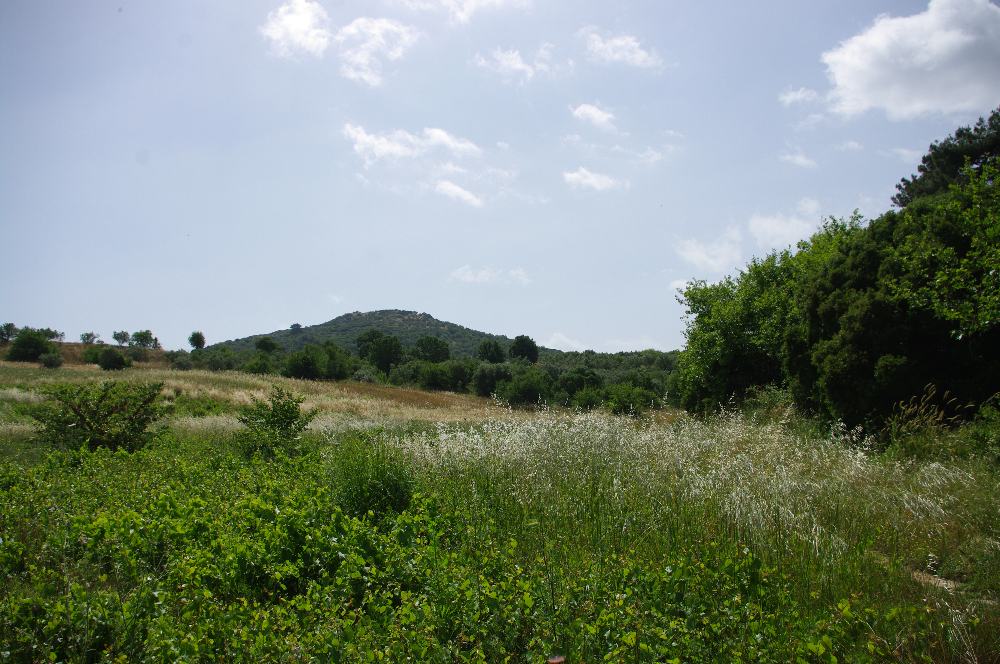 The first Swedish fieldwork in Greece took place June–August 1894 when archaeologist Sam Wide and Lennart Kjellberg excavated at Kalaureia. Having finished their campaign there, they returned to Athens where Kjellberg began working on the publication. Wide, on the other hand, was eager for further fieldwork opportunities and therefore visited the site of Aphidna together with German archaeologist Heinrich Bulle. They found Mycenaean sherds as well as three tombs and a tumulus in the area and Wide assumed that it had been the location of a Mycenean fortress and tholos tombs. Quickly being granted a permission from the Greek state to explore the tombs, Wide excavated the tumulus during the end of October the same year. One long trench from east to west revealed 13 tombs, some of them unusually rich even though the southern part of the tumulus had been disturbed with only the lower strata remaining intact. The excavations results were published by Wide alone.

The tumulus excavated by Wide at Aphidna was c. 24 m in diameter and surrounded by a stone circle laid from end to end using elliptical stones c. 25–30 cm in length. Conventionally the mound has been dated to the Middle Bronze Age (2000–1600 BC), but Jeannette Forsén has suggested that it may have been constructed already during Early Bronze Age II (c. 2700–2200 BC). This theory is based on the similarities of construction with an Early Bronze Age II tumulus found on top of the earlier House of the Tiles at Lerna. Some finds in the fill of the Aphidna tumulus, such as the spout of a zoomorphic clay rhyton, are also likely to date to the Early Bronze Age. 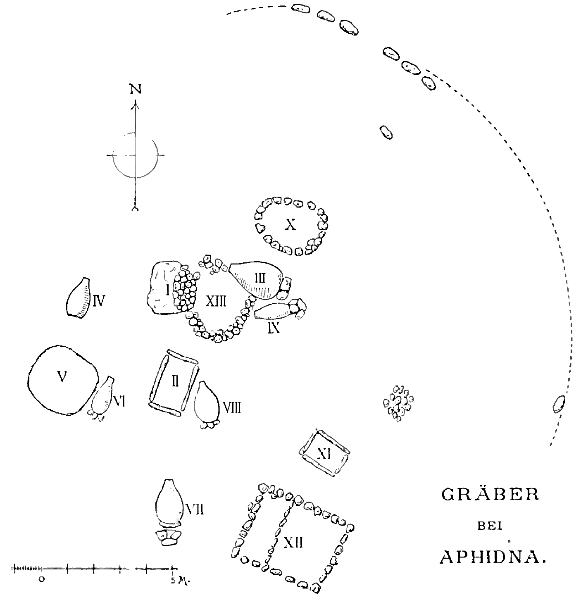 The graves in the tumulus belonged to three categories: shafts-graves, often covered with stone slabs, pithos burials, i.e. burials where a large storage vessel was used as a container for the dead, and cist graves, the sides of which were constructed by stone slabs. Of the 13 graves, five belong to the shaft-grave type (nos. I, V, X, XII and XIII), two were cist-graves (nos. II and XI) and six were pithos burials (nos. III, IV, VI, VII, VIII and IX). In all cases but one the tombs contained a single burial, the exception being Grave V where three crania were found as well as a other human bones.

Tombs nos. I and III were the most notable. Grave I, a shaft-grave, was undisturbed when found. It consisted of a shaft c. 1 m deep covered by a slab measuring 1.90×1.50 m. Above the shaft a smaller chamber measuring 1.50×0.90 m with a depth of 0.50 m was located, covered by smaller slabs and a stone packing. In the shaft the sparse unburnt remains of a single inhumation was found, as well as three bronze rings, fragments of silver and bronze vessels, six spindle-whorls and a large number of beads in various material and shapes. The pottery consisted of several gray ware vessels. Based on the presence of spindle-whorls it has been argued that the deceased probably was a woman. 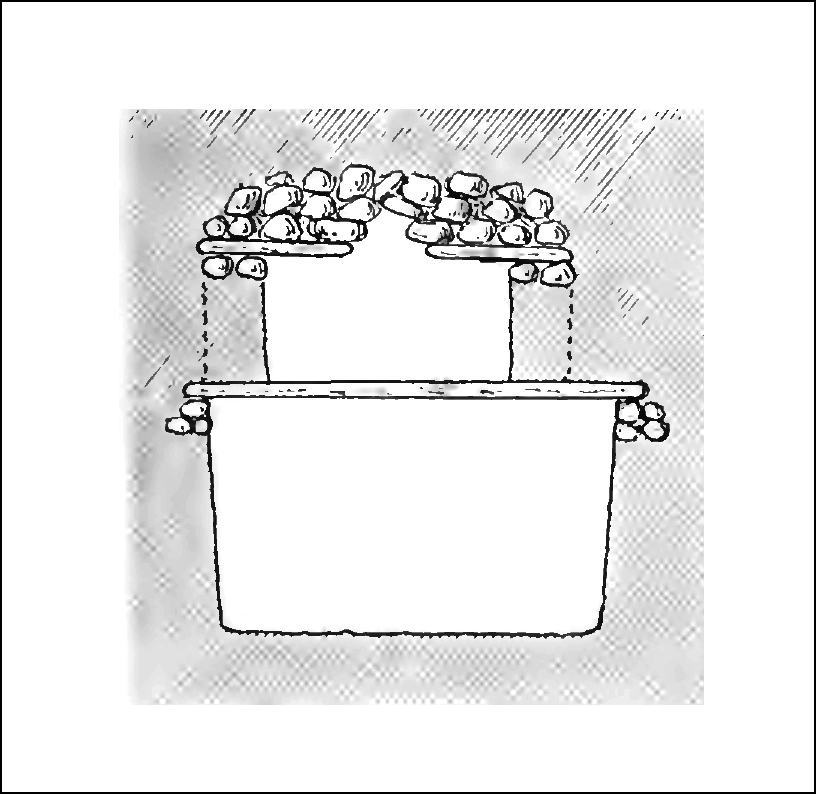 Grave III, a pithos burial, was by far the richest found during the excavations. Resting horizontally on a mix of limestone and burned wood, the vessel that formed the tomb was 1.75 m long and 1 m in diameter at the widest point, with the opening closed by a large limestone. The head of the deceased was found under the foot of the vessel along with a great deal of ash. Interestingly, the vessel had been repaired with lead straps, suggesting that it had been previously used for other purposes. Along with the cranium of the dead the tomb contained a large number of grave offerings. Close to the skull six gold rings were found, three of which had once formed a chain, as well as one of silver. It is possible that the short chain was used as an earring or a hairband. A wide range of ceramic vessels, most of them described as grey ware, were also found, including a composite vessel, a pedestal-footed pyxis, a bowl and two cups of grey burnished ware.

The cist-tombs were less well-preserved. The only finds in Grave II, 1.00 m deep and measuring 2.20×1.30 m, were two obsidian objects, a knife and arrowhead. The presence of this volcanic material suggests that humans living around Aphidna during the Middle Bronze Age were involved in the long-distance trade that existed during the period, as the obsidian presumably came from the island of Melos. Grave XI was similarly constructed by large stone slabs, 1.50 m long and 1.20 m wide, and only contained the head of the buried individual and a gray-ware vessel.

Four of the tombs (nos. II, IV, VIII and XII) were disturbed before being excavated, although some  finds remained. For example, in the pithos-burial in Grave IV the cranium of the dead was found along with a ceramic vessel and a spindle whorl.

Little is known about the history of Aphidna after the Middle Bronze Age. During later Classical times the area became one of the Athenian demes. It was during this time that the important fort was constructed on the Kotroni acropolis in order to protect the northern border of Attica.

Berg, I. 2016. Kalaureia 1894. A cultural history of the first Swedish excavation in Greece (Stockholm Studies in Archaoelogy, 69), Stockholm.