The reluctant activists: The ‘Greek case’ and the Scandinavian states’ ambivalence toward international human rights norms

The reluctant activists: The ‘Greek case’ and the Scandinavian states’ ambivalence toward international human rights norms

by Johan Karlsson Schaffer (Gothenburg University) that takes place on October 10, 2019, at 19h, at the Danish Institute at Athens, Chairefondos 14, Plaka.

The lecture is part of a series hosted by the Danish Institute, the Netherlands Institute, the Swedish Institute and the Norwegian Institute at Athens in the context of the conference The ‘Greek Case’ in the Council of Europe: A Game Changer for International Law and Human Rights? (Athens, 12–14 December 2019). Perceived as a prequel to the conference that commemorates the 50th anniversary of Greece’s withdrawal from the Council of Europe, the lectures engage with the broader issues involved, concerning human rights, European institutions and international law in the past and contemporary times. They will feature leading scholars, journalists, writers and human rights practitioners, among others. All lectures will take place at the Danish Institute at Athens from April to November 2019. 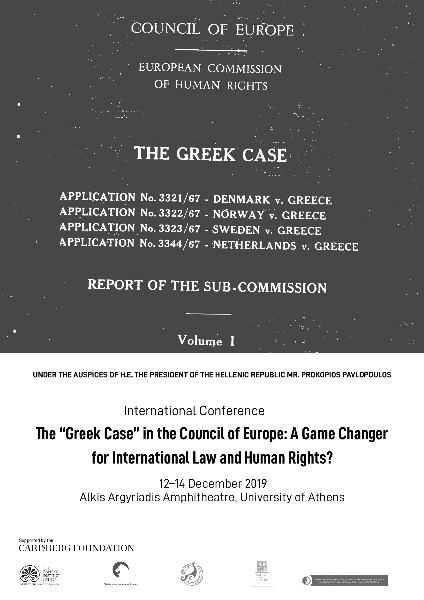