Annual of the Swedish Institutes at Athens and Rome

SIGNE BARFOED
The use of miniature pottery in Archaic–Hellenistic Greek sanctuaries. Considerations on terminology and ritual practice

SUSANNE BERNDT
The hand gesture and symbols of Sabazios

Opuscula is a refereed periodical, published in colour and available in print and in electronic format six months after publication.

The annual contains articles within Classical Archaeology, Ancient History, Art, Architecture and Philology, as well as book reviews within these subjects. Reports of fieldwork carried out under the supervision of the Institutes at Athens and Rome are regularly reported on in the Opuscula.

The annual welcomes contributions pertaining to the ancient Mediterranean world (prehistory to Late Antiquity) and the Classical tradition and drawing on archaeological, historical and philological studies; contributions dealing with later periods in the areas, especially in the fields of art, architecture, history and cultural heritage are also welcome.

The bibliographical abbreviation for Opuscula is OpAthRom.

Deadline for submissions to Opuscula is 1 November each year. All authors should consult ECSI Guides for Contributors (see Author resources) before submitting their manuscripts. Manuscript are submitted to the Secretary of the Editorial board (see Contact). 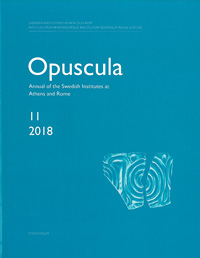