Aphidna was in Classical times one of the Attic demes and an important fort protecting the northern Attic border. The fortress is situated on the acropolis of Kotroni on the northwestern edge of the Marathon Lake.

After having visited Aphidna together with the German archaeologist Bulle, Sam Wide conducted an excavation at the site together with his colleague Lennart Kjellberg. Their excavation concerned a grave tumulus from the Middle Bronze Age which, as was shown, had been plundered. They started with placing a 24 m long trench over the tumulus from east to west. After this they concentrated their excavation to the 13 graves which were placed in the centre of the tumulus.The graves belong to three categories: deep shafts often covered with stone slabs, pithos burials, i.e. burials where large storage vessels were used as containers for the dead and cist graves, the sides of which consist of stone slabs. Of the 13 graves, five belong to the shaftgrave type, two were cistgraves and six were pithos burials. Wide mentions in his report (Athenische Mitteilungen 21, 1896, 385-409) that the bone fragments which were found were unburnt and he describes the finds belonging to each burial. The finds consist of pottery vases, which after the descriptions of Wide, can be classified as being made of Grey Minyan and Matt Painted wares. Metal finds were also made: rings of gold and silver and fragments of bronze. Spindle whorls, pierced stone beads and finds of obsidian are also mentioned. 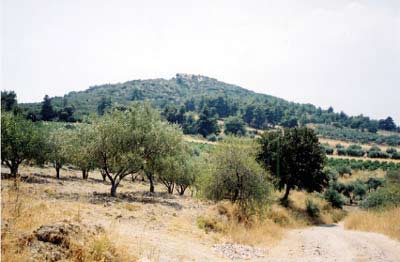 A 2000 view of the acropolis from the north. Photo: Berit Wells

Printed in 18/02/2020
From the web page Swedish Institute at Athens
www.sia.gr/en/articles.asp?tid=7