At Midea in the Argolid a Greek-Swedish project has been going on since 1983 under the direction of Katie Demakopoulou. Since 2000 Ann-Louise Schallin has been in charge of the Swedish side of the project.

Midea is the name of a hill on the fringe of the Argive plain and the site was a prominent Mycenaean citadel. The site has also yielded remains from earlier phases of the prehistory, as well as remains from post-Bronze Age times.

In the Mycenaean period a citadel wall was built encircling the approachable parts on the summit of the hill. The wall was built ca 1200 B.C. Within the wall, a habitation area has been excavated; a so-called megaron and portions of encircling rooms along the inner face of the wide citadel wall. From 2000-2009 the Swedes concentrated their efforts in excavating along the eastern part of the citadel wall and especially at one of the gates – the east one – and east of the East Gate, where a number of Mycenaean basement rooms are located.

The most important results during these years have been the finds confirming that Midea was one of the competing citadels in the Mycenaean Argolid as witnessed by fine Mycenaean and especially Pictorial pottery, objects of bronze, glass, ivory and other precious materials. A cylinder seal of steatite may actually have been imported from far away Mesopotamia.

In 2015 work is carried out on the site with the aim of adding more detailed data to the site plan. Processing of the archaeological material takes place during short periods continuously during the year. 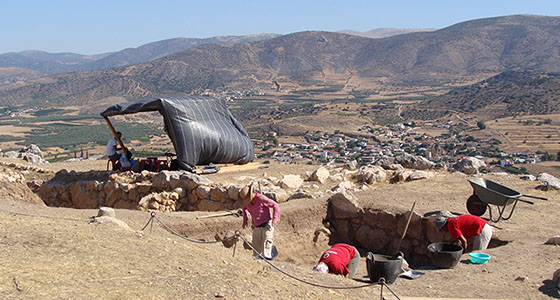 Printed in 01/04/2020
From the web page Swedish Institute at Athens
www.sia.gr/en/articles.asp?tid=31&export=html