Dendra and Midea in the Argolid

The neighbouring villages Dendra and Midea are situated in the northern Argolid, c. six km east of the town of Argos. At Dendra there are remains of habitation from the Early Neolithic and from the Early Helladic periods. There are also tombs dated to various Bronze Age periods. The village of Midea is situated c. two km to the east of Dendra. South of the village is the 270 m high mountain of Midea where German archaeologists already in 1907 made some investigations. It has been assumed that the habitation on the acropolis of Midea and the necropolis at Dendra were connected because of the short distance between the sites, i.e. the inhabitants of Midea may have used Dendra as a burial place.Axel W. Persson initiated the Swedish field work in the area with the excavation of a Mycenaean (LH IIIA) tholos tomb at Dendra in 1926. It was noted that there were also chamber tombs of the same date. A Mycenaean necropolis had been identified. Many of the chamber tombs were excavated in the following years and the present ephoros in Nauplion at that time, N. Bertos, participated in this work.

Already during his first excavation season, Persson had concluded that Midea was a fortified Mycenaean citadel. In 1939 the line of the wall was recorded, some cleaning was done in the East Gate area and some excavations were conducted on the higher plateau as well as on the lower terraces. Persson’s results were published in two volumes: The Royal Tombs at Dendra near Midea (1931) and New Tombs at Dendra (1942). Persson had probably intended to continue the excavations, but all field activities ceased because of the start of the second world war. Instead, it was Paul Åström who continued the Swedish archaeological commitment at Dendra and Midea, and it was at this time, in 1960, that the field work became a joint Greek-Swedish project. Åström and N. Verdelis, ephor at Nauplion, made an important and unique discovery in the excavation of ‘The Cuirass Tomb’, namely a bronze cuirass, which is in the Nauplion Museum. In 1963 Verdelis and Åström made a small excavation on the citadel of Midea. These activities are published in The Cuirass Tomb and other Finds at Dendra (1977) and (1983).

Twenty years passed before Midea once more became the focus of field archaeological interest. In 1983 a joint Greek-Swedish excavation project was initiated under the direction of Katie Demakopoulou and Paul Åström. Work has been concentrated on the area within the citadel wall and more specifically to the two gate areas. The higher plateau has mostly been left untouched, probably because this is the most eroded part of the citadel area. Since 2000 the Swedish side of the project is directed by Ann-Louise Schallin.

The wide citadel wall on the slope of Midea is clearly visible from far away in the Argolid plain. The wall is dated to c. 1200 B.C. According to Persson, a Mycenaean megaron was situated on the higher plateau of the citadel. In 1939 cutting marks in the bedrock were noted here and a preliminary sketch plan of the layout of the ‘palace’ was published. These observations are hard to verify today, because of the erosion of the bedrock and the dense vegetation covering the plateau where the cliff is not visible. The excavations which were begun in 1983 have been concentrated to the East and the West Gate respectively. The soil is packed thickly against the citadel wall and it has been noted that walls dating to approximately the same period as the citadel wall were built against and parallel with it. There is a lot of material in the thick layers of soil and in the upper layers the material is very mixed as it represents material eroded from higher levels. The material mostly consists of pottery sherds and covers a wide chronological range. The earliest pottery is dated to the Middle and Final Neolithic periods; all the main periods of the Bronze Age are represented; some limited activity can be noted in the Archaic, as well as in the Classical and possibly the Hellenistic periods. In Late Roman and in Early Byzantine times, there is also evidence of habitation.

Except for the investigations along the citadel wall, excavations have also been undertaken on the lower terraces within the eastern citadel area. Under the direction of Gisela Walberg an impressive, rectangular building was excavated (LH IIIB and LH IIIC). Parts of the results from this work has been published in The Excavations on the Lower Terraces 1985-1991 (1998). In the various excavations on Midea it has been noted that a severe destruction occurred c. 1200 B.C., i.e. shortly after the erection of the citadel wall. The destruction is characterized by ashy, grey soil, mixed with bits and pieces of charcoal and other burnt organic material. We do not know the cause behind the destruction, but it may have been the result of an earthquake or conflagration caused by enemies invading Midea.

In the future the Swedish part of the Midea project will continue to investigate the east side of the citadel area and especially the areas of the East Gate and east of the East Gate. One of the goals is to find architectural evidence for the early prehistoric habitation. We also want to explore the activity on Midea in historic times. 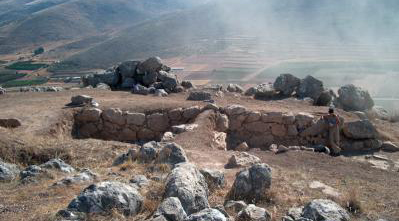 Printed in 27/02/2020
From the web page Swedish Institute at Athens
www.sia.gr/en/articles.asp?tid=25